Follow the latest of the Basketball Without Borders camp in our daily blog.

DAY 4: The Champs are crowned

The final day of the ninth Basketball without Borders (BWB) Americas 2017 closed with a flourish as the top 66 boys and girls from 16 countries and territories competed in playoff games and a pair of All-Star Games in front of cheering local Bahamian fans Saturday.

At the conclusion of the games, the boys and girls All-Star teams were announced, and in the afternoon, the camp was opened to the general public for the two camper All-Star Games.

In between the All-Star Games, a fun 3-point shooting contest was held among Anthony Lawson (Canada), who was the boys 3-point winner on Friday, Sofia Alejandra Payan Martinez (Mexico), who won the girls 3-point title, and NBA player Sasha Vujačić.

An awards ceremony was held at the end of the day to salute all the campers, and the NBA/WNBA/FIBA coaches and players who worked with each of the campers to improve their skills and help them become even better players in the future.

During the ceremony, the boys and girls camp MVPs and All-Star Game MVPs were announced.

The All-Star Game MVPs were Wheza Panzo (Canada) for the boys and Florencia Chagas (Argentina) for the girls.

The BWB Americas 2017 camp was a success across the board during the first time it was held in the Bahamas.

The third day of the Basketball without Borders (BWB) Americas 2017 saw more individual and team competition inside the Kendal G.L. Isaacs National Gymnasium on Friday.

All 66 campers from 16 countries and territories from the Americas arrived at Isaacs Gym in the morning and each participated in a 3-point shooting contest.  After taking turns going around the 3-point arc, the campers then worked on individual position skills and held short team practices with instruction from the NBA/WNBA/FIBA coaches and players.

In the afternoon, the four boys’ teams and two girls’ teams took to the floor for the final set of games that would determine the playoff matchups for Saturday.

After the day’s games were complete, the coaches working the BWB Americas’ camp held a clinic for coaches to help advance the game of basketball in the Bahamas and teach NBA and WNBA concepts.  Also, the final daily referee clinic was held for Bahamas Basketball Federation referees.

Saturday, playoff (semifinals, finals and consolation for the boys’ teams and a single championship game for the girls) games will be held in the morning, and afterward, the BWB All-Star boys and girls teams will be announced.  Those players selected will participate in the All-Star games in the afternoon.

A short awards ceremony will follow the All-Star games to close out the BWB Americas 2017 camp. 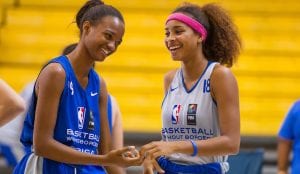 The focus of the second day of the Basketball without Borders (BWB) Americas 2017 camp Thursday in Nassau’s Kendal G.L. Isaacs National Gymnasium was the first games for the teams selected by the camp coaches in the previous evening’s draft at the Atlantis Paradise Island.

After an hour of NBA Combine-style evaluations in the morning, both boys and girls continued to work on positional skill development with the camp staff.  The campers had the opportunity to practice with their new teammates before taking the court for games.

The campers, the top 66 boys and girls from 16 countries and territories from the Americas, showed their skills in competition and received instruction from the coaches and the NBA/WNBA/FIBA players during and after each game.  While the languages are different, the concepts of basketball are the same across each country represented at BWB Americas.

Friday, the morning will begin with a 3-point shooting competition in the morning, positional skill development and practices, before all campers play in another series of games in the afternoon.  A BWB Coaching Clinic will follow the day’s games.

Basketball without Borders (BWB) Americas 2017 officially opened at Nassau’s Kendal G.L. Isaacs National Gymnasium on Wednesday with a press conference, featuring NBA/WNBA/FIBA players, coaches and VIP guests who were on hand to welcome the campers and to thank all of those who were integral in the development of this camp such as Nike, the Bahamas Basketball Federation and the Bahamas Ministry of Youth, Sports and Culture.  Top media from major Bahamian and international outlets were in attendance to cover the program and participate in a photo and interview session.

The campers, the top 66 boys and girls from 16 countries and territories from the Americas, started their day with a Life Skills session where they learned what to expect over the course of the camp.  Dwight Powell (Dallas Mavericks; Canada), Tiago Splitter (Brazil), Anderson Varejao (Brazil), NBA Legend Acie Law (U.S.) and WNBA Legend Ebony Hoffman (U.S.) led the session, and they answered camper questions about playing in the NBA and WNBA.  Whether in Spanish, Portuguese or English, there were plenty of questions to go around.

Campers then moved onto a round of morning positions skills stations: point guards, wings and bigs.  Afternoon scrimmages gave camp coaches a chance to evaluate the talent level of the players as BWB Americas Draft will take place tonight.

Later in the day, more than 60 local youth from a primary school and an orphanage visited the BWB Americas’ camp for a much-anticipated Jr. NBA clinic.  The clinic gave the kids the opportunity to work on their passing, shooting and rebounding skills alongside NBA and WNBA stars.  The children were thrilled to share the court with some of the best players in the world, and they left the gym with happy faces and unforgettable memories.

The day ended with a referee clinic for Bahamas game officials, who are working the scrimmages and games during BWB Americas 2017.

After Wednesday’s draft, the campers will be back on the court Thursday to take part in combine-style evaluations and positional skill development in the morning before taking the court for games in the afternoon.