The 15th Basketball without Borders Africa Camp tipped off today at the impressive American International School of Johannesburg, a regular host of the program for many years.

The morning began with the opening press conference that included remarks by a number of local dignitaries and stakeholders including Mr. Amadou Gallo Fall, NBA Vice President and Managing Director for Africa, Sharon Peetz, Member of Mayoral Committee for Economic Development, City of Johannesburg, NBA Deputy Commissioner Mark Tatum, and Sanele Mthiyane President Basketball South Africa. Once all of the NBA players and coaches were introduced to the assembled media, guests and campers, the NBA’s sixth All-Time leading scorer Dirk Nowitzki from the Dallas Mavericks closed proceedings, alongside NBA Global Ambassador Dikembe Mutombo.

The 15th Basketball without Borders Africa camp brings together the top 80 Boys and Girls ages 17 and under from 26 African Countries.  BWB has reached more than 2,780 participants from 134 countries and territories since 2001, with 46 campers, including nine BWB Africa campers, drafted into the NBA. (BWB) Africa took place ahead of NBA Africa Game 2017, the NBA’s second game in Africa in a busy week for campers and players alike.

Each day began with daily life skills seminars focusing on health, leadership and communication, before the NBA and WNBA players and former players together with NBA coaches put the campers through their paces with a variety of activities on and off the court, including movement efficiency, positional skill development, shooting and skills competitions before playing 5-on-5 games each afternoon in their respective teams. 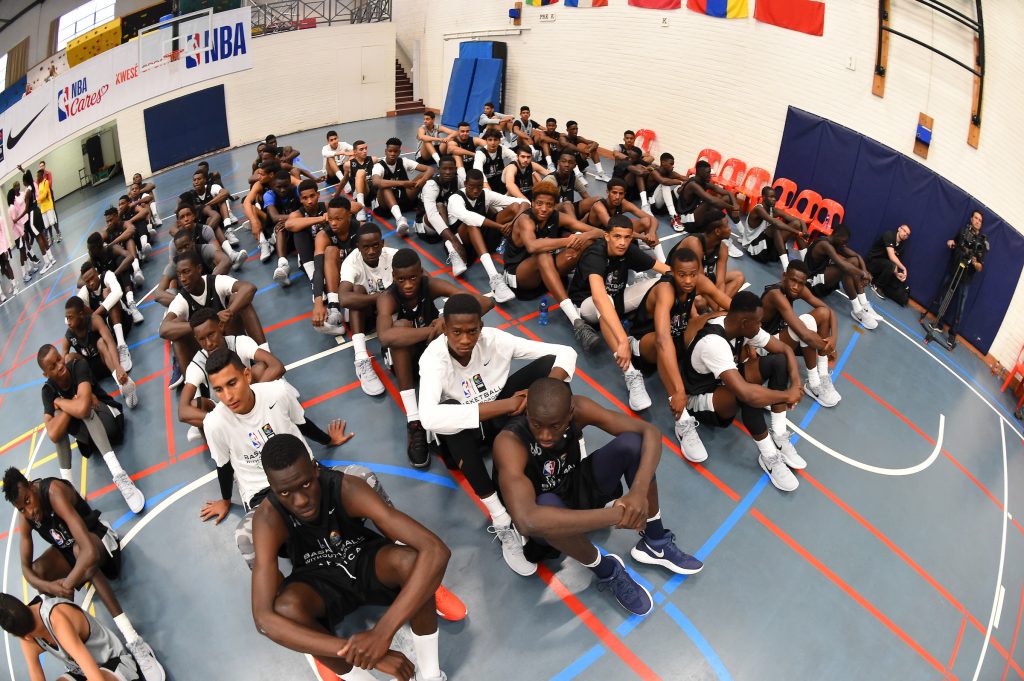 To round off Day 1, a NBA Africa first saw the inaugural Jr. NBA Africa Festival take place at the Royal Bafokeng Sports Palace, Phokeng. The Festival saw youth from five different countries gather in the North West Province, over two days for a celebration of basketball and life skills programming. Participants had been selected through the NBA’s existing Jr. NBA programs in Kenya, Nigeria, Senegal, South Africa and Zimbabwe. The boys and girls winning teams came from Johannesburg and Bafokeng respectively.

Day 2 – No borders to basketball:

Day 2 began with a lively Lifeskills session with Hoops for Hope that saw the campers interact throgh a number of team-bulding exercises that required communication, collaboration and teamwork (and a lot of singing and dancing along the way…)

Not only is Africa the second most populous continent in the world with over one billion people, but it is also home to the highest linguistic diversity in the world, with over 1500 different languages. BWB is no different and with campers from across Africa, speaking languages ranging from French, Portuguese to English, Arabic and a host of regional dialects, the session showed that despite certain language barriers, campers were able to reach a goal together. It proved once again that sport is a universal language and there are no borders to basketball.

The campers then took part in the daily coaching stations and drills focusing on core fundamentals, all under the watchful eye and coaching expertise of the NBA players and coaches. 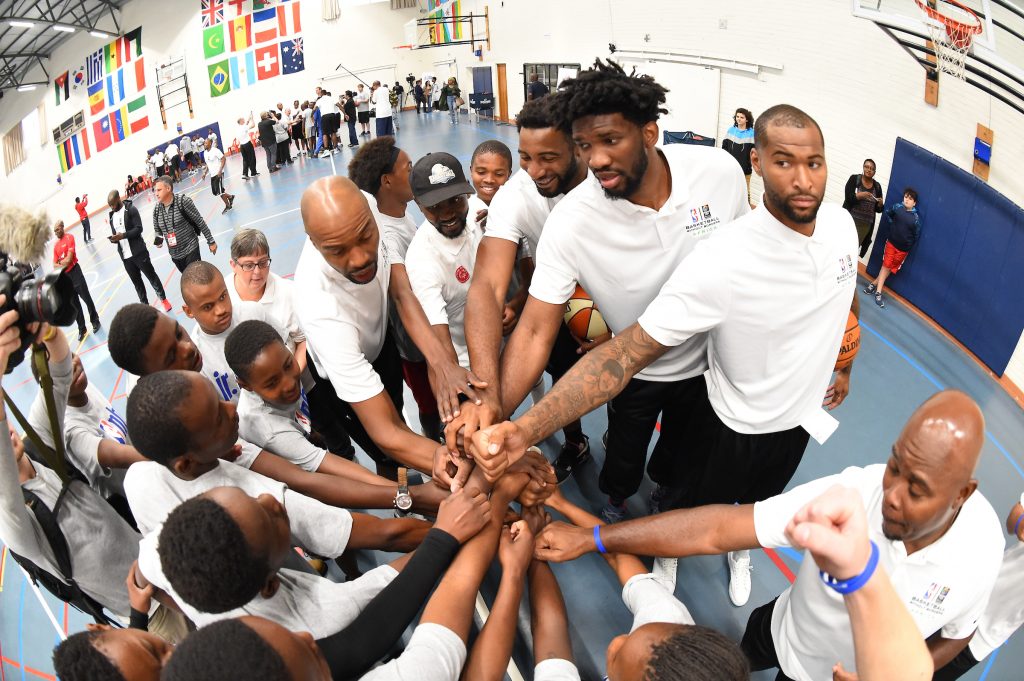 In the afternoon, over 200 volunteers from the NBA family including NBA Deputy Commissioner Mark Tatum, NBA Players, NBA and WNBA Legends, NBA Coaches, and NBPA executives travelled to Lenasia South district to help build 10 homes alongside the benefitting families. At the completion of this project, the NBA will have created 47 places to live, learn and play in South Africa. Habitat for Humanity South Africa brings people together to provide decent shelter, improve livelihoods and reduce housing poverty for low-income families. Since 2007, together with NBA Cares, Habitat for Humanity South Africa has been building strength, stability and self-reliance through shelter in Johannesburg, Ivory Park, Orange Farm, Soweto and Katlehong.

“It’s a humbling experience,” Charlotte Hornets’ Kemba Walker said. “When you come here and you see this, you can’t complain. We can’t complain back home. People complain about the dumbest things, and we have no idea what’s really out here in this world. It’s very humbling. Definitely gives me a whole different perspective on life.”

“Seeing the disparity between the rich and the poor and how thankful they are for what they have even though they don’t have a lot, that was definitely eye-opening,” commented Portland Trail Blazers guard C.J.McCollum. “Seeing some of their situations, having to walk four or five miles for water, not having running water or electricity in their home, having to actually build their own home, grow their own food, farm their own land, that was eye-opening.”

With BWB coming to a close with the final games and stations at the American International School, the focus was again on the impact that the NBA and it’s players can make on the greater community under the umbrella of NBA Cares – the cornerstone of the NBA’s Social Responsibility program. 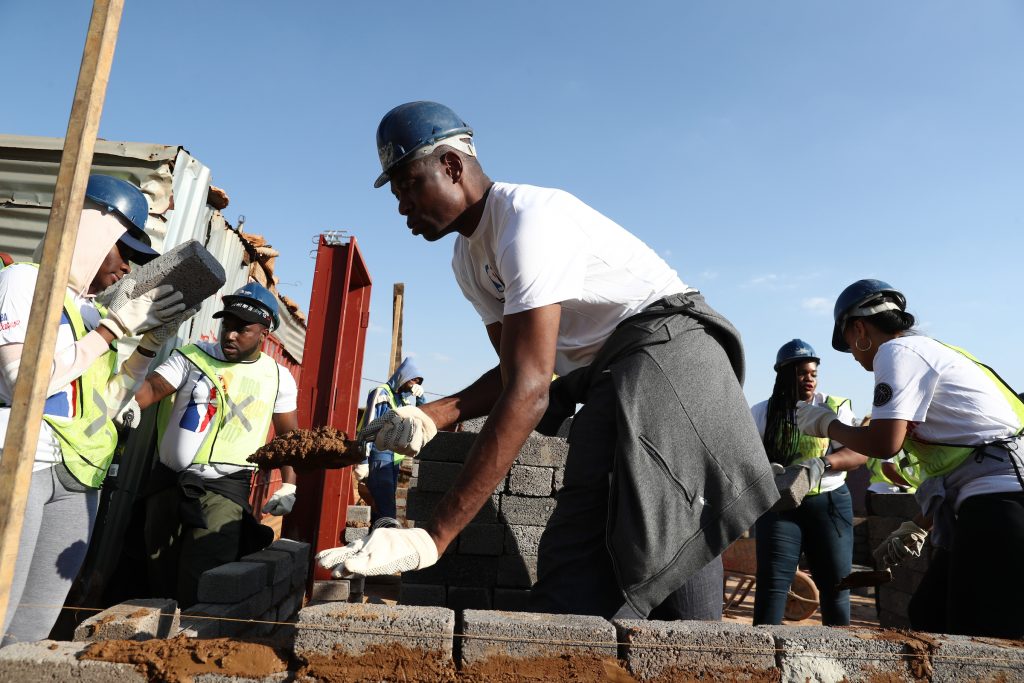 For the fourth year, NBA players, legends and executives visited the Ennerdale village of SOS Children’s Villages, an organization that builds families for orphaned, abandoned and other vulnerable children in 134 countries and territories.  As part of the NBA Africa Game and Basketball without Borders (BWB), the village’s youth took part in a basketball clinic led by NBA players and legends. Players were greeted at the gates of the Village by the local youngsters, in full song and dance. The procession was then led to the recently refurbished basketball court. Here, what began with some fun basketball drills, descended into a concoction of basketball-meets-music-meets dancing as a number of the local children began an impromptu dance-off with some of the NBA players. The day ended with a traditional South African ‘Braai’ (or BBQ), as the NBA players said goodbye to their new-found friends, proving once again, that it is the size of your heart that truly matters.

Events shifted to the magnificent Ticketpro Dome on the final day for the BWB Boys and Girls All-Star games.

Later in the afternoon, the culmination of a week’s events saw fans descend in their thousands to catch Team Africa, led by co-captains Luol Deng, South Sudan and Thabo Sefolosha, Switzerland/South Africa,  take on Team World co-captains Dirk Nowitzki and Kemba Walker and the rest of the team for the second NBA Africa Game 2017. A sold-out crowd were in for a treat. With Team World taking an early lead, it was ultimatelyTeam Africa that could almost have sneaked a win. A Victor Oladipo three-pointer brought the ‘home’ team to within 1 point with just over 1 minute to play, but unfortunately for the local crowd it was too little too late as Team World made some key plays down the stretch to secured the 108-97 victory. Oladipo led all scorers with 28-points and was named Most Valuable Player. 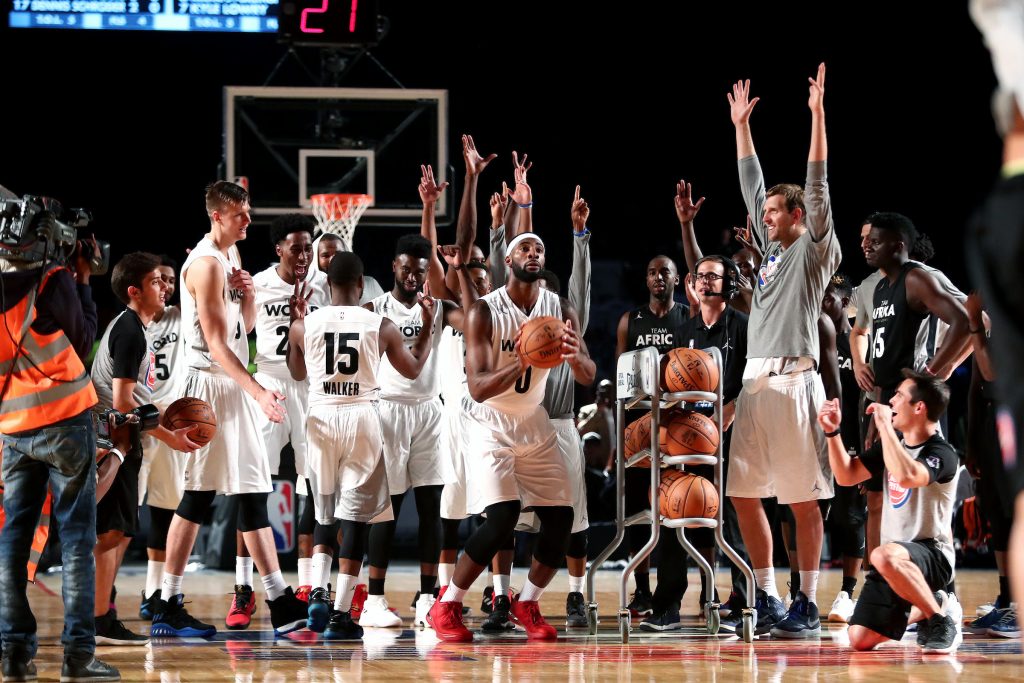