It proved to be an exciting event with the home team (Mexico) making a comeback and toppling to the finals against team Canada. In the end, team Canada came out on top and earned the title of Americas Team Camp 2016 Champions. 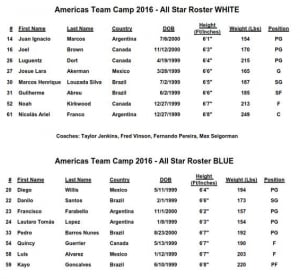 The All-Star competition continued the on-court action with team Brazil having the strongest representation with five All-Stars on team rosters. Teams Canada and Argentina each had four while team Mexico had three. At the 5:30 mark, team Azul (blue) started the game with a five point lead over team Blanco (white). The lead was quickly diminished, and team Blanco was the 76-43 victor.

After the All-Star game, there was an awards presentation where Luguentz Dort (#26, Canada) earned the All-Star Game MVP award and Noah Kirkwood (#52, Canada) the Camp MVP title.
As a very successful Americas Team Camp came to an end, campers, NBA players and coaches left CNAR having built many new friendships, lasting memories and a strong foundation for basketball and sportsmanship.